Back to running – and cold dips in the Neckar 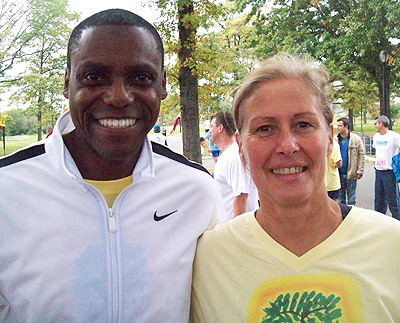 Meeting Carl Lewis again in New York, Oct. 2009 (He is wearing the same T-shirt under his jacket!)

During a short visit to New York to honour the Mahasamadhi anniversary of my teacher Sri Chinmoy on Oct. 11th, I had the good fortune of meeting once again Carl Lewis (“Athlete of the Century”), who has been a supporter of and spokesman for the World Harmony Run since its inception back in 1987. Carl has launched a new project FitForever.com – the ultimate online fitness tool and community – and everyone is welcome to join!

Running is fun again now that temperatures are beginning to drop. (I basically hadn’t run since my slow 12 hour run in Basel in May.) I love running in the crisp autum air, with brightly coloured leaves all around, and even now, in misty, slightly depressive November. But with my extra kilos now, I have become quite slow. Kastura, a friend, has given me some tips how to get faster again. Next goals: Heidelberg half marathon end of April, then 6 hour-race in Nuremberg (March) and 12 hours of Basel in May. For swimming: 12 hours, Zurich indoors, on March 1st, 2010.

Back to the Neckar

Since our English Channel relay I hadn’t been swimming at all. The indoor pool is still frightening me with its warm temperatures, but I will have to start training for speed, technique, and endurance soon. The first cold dip in the Neckar this season was on Sunday, Nov. 15  – must have been way below Channel temperature already.

Today (Nov. 17th) an article about our English Channel relay appeared in our local newspaper. Feels a bit out of place for only 3 hours 21 min. of swimming in my case, but it was a great adventure with a lot of oneness in our international team – which may be much more important than just doing great things for yourself! And if anybody gets any inspiration from it, I am very happy!

The Neckar in November

“Just silence the mind.
Lo!
Cosmic energy enters
Into our entire being,
And tremendous energy
Flows in and through us.”
– Sri Chinmoy –