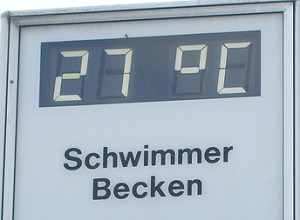 In July it became clear that even if the Channel pilots ran out of swimmers during a period of good weather in September, I would not be able to swim a solo this year. Instead of stepping up my training – at least for a possible last minute Zurich lake spot – I had to reduce. From my computer work (and some games in between) I contracted a painful tendonitis on my right wrist. Olive oil bandages over night helped a little, and swimming for half an hour a day, I felt, helped the healing process, too. But 1 hour or longer swims were out of the question for a few weeks.

In addition, pool temperatures went up to 27°c. On rain days only the warm pool was open – at 28 °C or more, plus overcrowded. Going to the lake regularly for only a short swim was hardly worth the trouble. The best were half-rainy days, with the regular pool open just in the morning with only a few swimmers.

My tendonitis did not even allow me to go to Zurich at the end of July to at least help rowing, and so I did some professional training instead. The next day I heard I could have even gotten a last minute swim slot! What kind of year was this for me???

So I continued following closely how other Channel swimmers were doing via satellite trackers and chat group.

Waidsee in Weinheim - great for middle distance training - 30 min. to the other side and back in a triangle

In August, when my wrist had gotten better, I enjoyed a few “longer” swims in the smaller lake in Weinheim, but never doing anything over 2,5 hours. My feeling was, I should soon start training more seriously again for next year, but it seemed hard to really get motivated. At that point I did not expect anything special to happen this year any more. 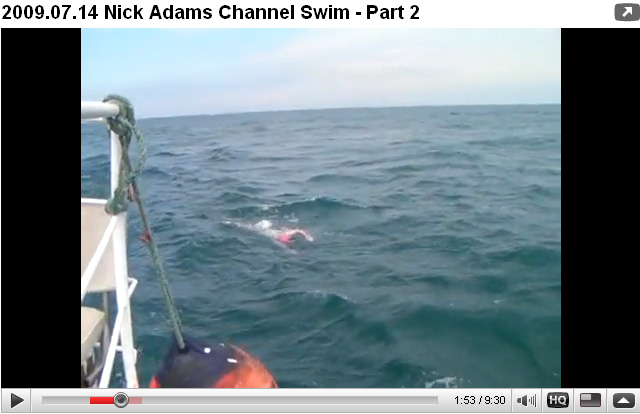 Only a few solo swimmers have succeeded in their crossing so far for this year.  Relays can manage better with more difficult weather and tidal conditions – except for the seasickness on board!

Nick Adams – accomplished 4 times Channel soloist now and even one time 2-way Channel swimmer – did not have an easy time on his 4th crossing: 5 hours in windforce 5 is no joke! Very well done for staying in there and not giving up (he may be forgiven for throwing up on the video, cause the windforce 5 part could not be filmed or photographed for understandable reasons, and the end of the video may just convey a bit the drama).

Link to video Part I starting with the greasing up in the dark (a start in the dark is acutally nice because you swim into daylight!)

Unfortunately there is no video or photos available for Sophie Rutenbar of the Serpentine Club (they swim in the Serpentine in Hyde Park the middle of London even in the midst of winter in snow), who conquered the same conditions in a great time of 14:33.

And as a stress-relief for those endless days of patient waiting: the Russian way of acclimatising to low temperatures:

Russian Ice Swimmers -are you sure you are well prepared for the Channel?