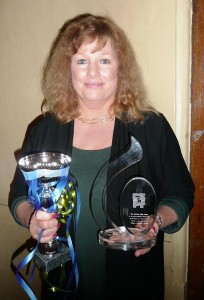 On Dec. 23rd we received the sad news that Vijaya Catherine Claxton had left this earth.

She was a respected member of the International Sri Chinmoy Marathon Team who made it across the English Channel from Dover to France the hard way on Sept. 8, 2007, in 22 hours 27 min., after three heroic attempts in the years before. Vijaya, who held a responsible position at the United Nations Headquarters in New York, became the oldest US lady to swim the Channel at age 59, and in March 2008 received the prestigious Gertrude-Ederle-Award for the most meritorious CS&PF English Channel swim by a woman in 2007.

“Vijaya was a bubbly person known to a lot of us in the Channel swimming world. She came into our lives determined to swim the Channel and did it on her fourth attempt with Eddie in 2008. Her first three attempts were with me. All were long swims, all were great advances on the previous swim. All were very happy swims with a great support team of girls who enjoyed life to the full. Vijaya, complete with her smile and her willingness to help all around her will be sadly missed by the people who knew her. Those who did not know her missed out on one of the little pleasures of life.” – Mike Oram, pilot and Hon. Secretary of the CS&PF, and Angela Oram, Assistant Hon. Secretary of the CS&PF

Vijaya after her successful swim Sept 2007 with Alison Streeter, Queen of the Channel (43 crossings) and "King" Kevin (photo by Cliff Golding)

“I happened to be on the jetty when Vijaya came off the boat after her Channel swim and I recall being immensely impressed by how cheerful and energetic she was. She wasn’t fast but she had enormous determination. It was a long and therefore a tough swim  – but you never would have known it. She was an inspiration.” – Kevin Murphy, “King of the Channel” (34 crossings)

“I remember Vijaya swimming in the Dover harbor, always having a smile on her face, no matter how long she was in the water. The love she had for the water and our sport will be missed.” – Marcy McDonald, Connecticut

“She was truly an inspiration. Vijaya taught me so much and I am a better person for having known her.” – Anne Cleveland

More:  www.thewaterisopen.com, on my old blog, on Sri Chinmoy Races and on Open Water Swimmig.eu and Dover UK.

“Death has no access
To the soul.
It only has access
To our weak and fragile body.” – Sri Chinmoy

“Death is at once
The end of the body’s
Old journey
And the beginning of the soul’s
New journey.” – Sri Chinmoy