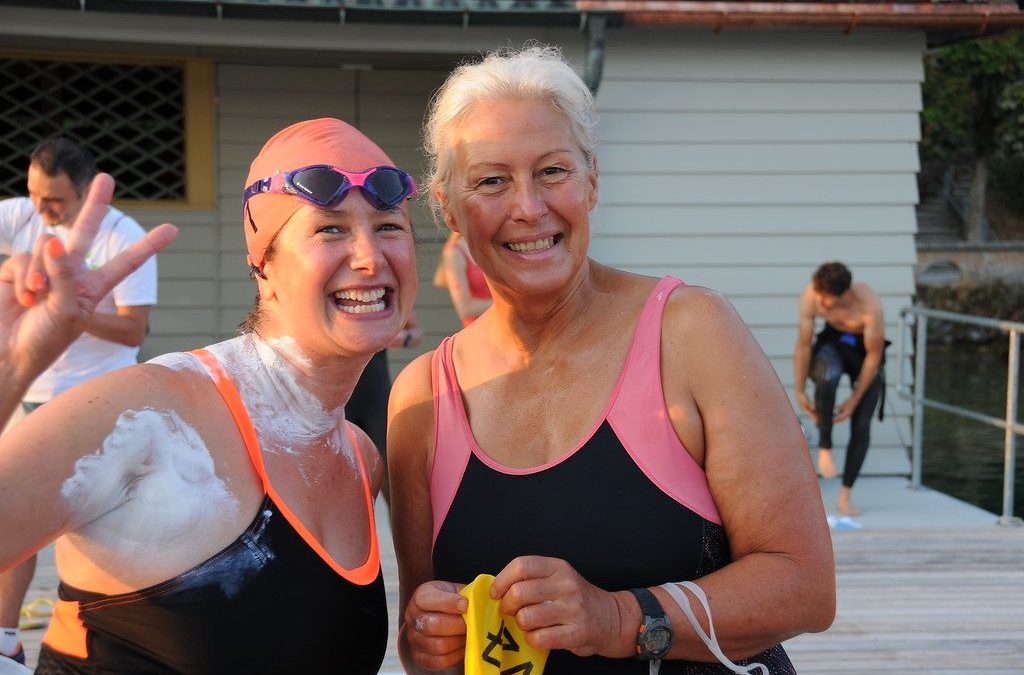 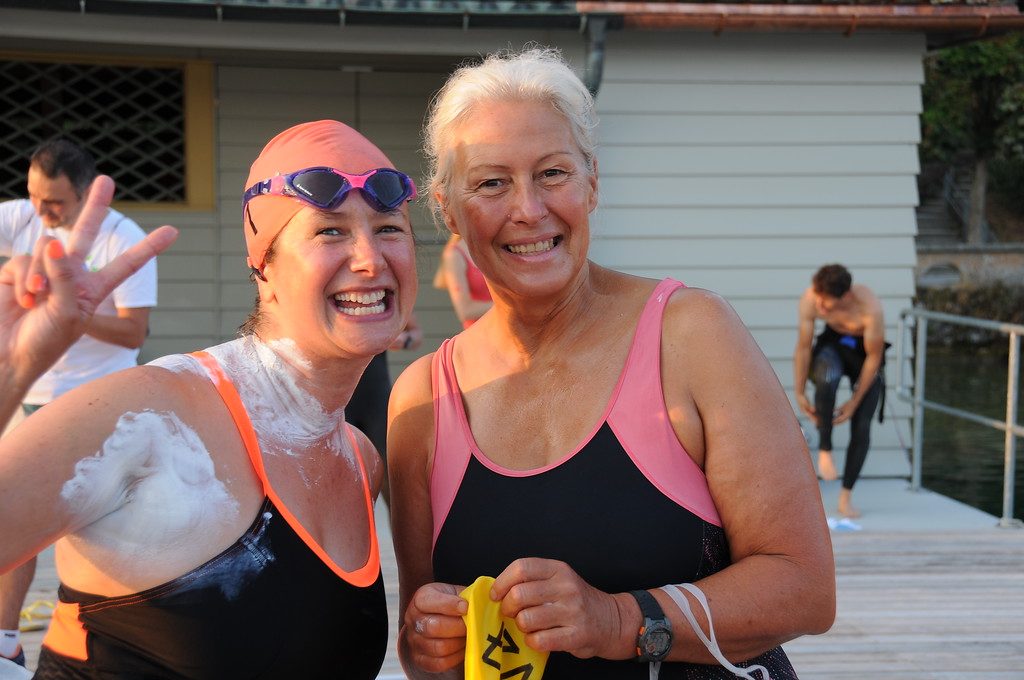 It was supposed to be a very good training swim for the English Channel, since I was booked for the tide starting Sept. 16th (to 22nd). However, the water was warm as a bath tub! (In 2010 it was a cool 19°C, which was perfect preparation for my Channel-triathlon in Sept. 2010).

When we entered the water at 7 a.m. in the morning – after a beautiful star studded outdoor night on the lido deck (with 3 shooting stars!) – it felt like a bath tub! Yet the swim was not going to be easy. We had more DNFs than usual, and, apart from the very fast swimmers,  most of the swimmers were slower in the second, shorter half after Meilen – wind and waves were against us, even if the waves looked tiny on photos and video. For the first time ever I barely made it. Luckily the head organizer came up to our boat in Küsnacht, at the last cut-off, and asked how I felt and if I had any power left. I said yes, a little bit amazed, but he pointed out that I had to speed up to be able to make it within the 12 hour cutoff. I had not been aware at all that we had slowed down so much! True, for a few hours I felt my energy levels were a bit down, but it did not worry me. So I started to “sprint” – which is not really much faster than my usual speed – but it helped. Soon the yellow sunshades near the finish line came into sight, but they seemed to stay in the distance forever. The clock was ticking, and it was impossible to tell if we would make it. For the rowers it was hard to steer a straight line, and for me it was hard to sight with the waves. 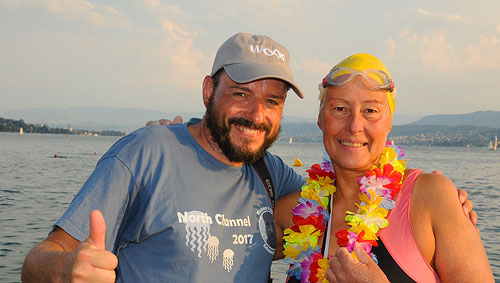 with Matthias Kassner, English Channel, Catalina Channel, Gibraltar Strait and North Channel swimmer (and more) after my 11 h 58:34 finish – his swimmer unfortunately also did not make the cut-off …

So I surrendered, and just tried to stay cheerful, give my best, still take a few seconds to fuel up a few more times to keep the speed and follow the boat. I prayed to just be able to finish – never mind the time. If it should be under 12 hours I would be extremely grateful. But who knows what kind of experience was the best for me right now. Sometimes defeat can teach your more than victory, we know that. But then, even finishing over 12 hours would not really count as defeat. Anyway – although the rainbow balloons at the finish took ages to appear and come closer, I finally made it in 11 hours 58 minutes and 34 seconds – the last finisher! I was so grateful! It was like a very special blessing. True, our relay team finished after me, but since the relays started 30 minutes after the solos they were still faster. 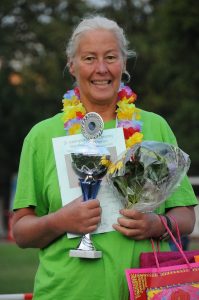 First (and only) place woman masters bioprene (no wetsuit)

Interestingly I felt quite fine at the end. A little dizzy, but nothing overly unusual. Got a great massage just before the massage tent went down, had some food and refreshments at the amazing vegetarian buffet and then got ready for the award ceremony – with lots of Channel swimmers present. Very surprised to find I placed first for the masters women – the 2 other bioprene master ladies (= non-wetsuit) had not made the cutoffs at Meilen and Küsnacht, one neoprene woman masters swimmer set a new course record, while the second one also did not finish! Among the men, 6 did not make the cutoffs this time – a record number!

Link to → results and fotos of Zurich-Rapperswil 2018

Also here are two nice videos of 2018: → short version (8 min) and → longer version with all the swimmers

Although this swim basically went fine for me, apart from the weaker hours in the second half past Meilen, the next and last long training swim – a 7 hour swim in Dover, Sept. 1st, after a long bus ride and little sleep, gave me a hugely different, totally new experience. One that forced me to abandon my Dover-Heidelberg attempt at least for this year!