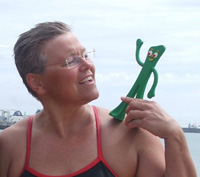 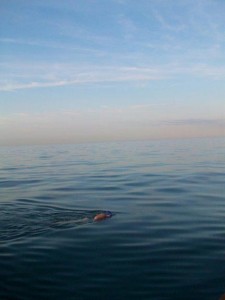 These are the days every Channel swimmer is  longing for – but they are rare and precious – and sometimes just too short for slower swimmers who need a bigger window of swimmable weather in the fast changing Channel conditions – or for a double:

When attempting to swim the Channel, a lot of patience may be needed. Plus plenty of luck or Grace. Often swimmers are waiting for more than one tide without even getting a chance to attempt their swim. They have prepared for one or more years, flewn in from other continents – maybe for nothing. So, often swimmers will go out on “iffy” days – never knowing for sure how conditions will develop, in spite of the knowledge and experience of their pilots.

“Perfect”  days in the Channel are very, very few, especially during the short period of the neap tides, but yesterday was one of them: almost no winds, no currents, sun out – most of the pilot boats were out with their swimmers, some can be followed all the way via satellite tracking. In the late afternoon you could see many of the boats crowding around Cap Griz Nez or just on their way back – a couple of swims reached the Cap dead-on.

Satellite Tracking of Anastasia, July 31st, 2009, with debris from a previous swim on July 29th

Here is one of those almost straight swims – the broken line to the right shows the remains of a previous swim 2 days earlier – with much more tidal push.

Webcam at Wissant bay on Aug 1st, where many swimmers touch French ground

don`t seem to be as perfect anymore  – while Wissant (left) is looking pretty calm still.

Dover on the morning of Aug 1st - photo by Marcy MacDonald

Below: This was the situation in Dover in the morning – so quite a few boats ready to go turned round back into the harbour to wait for a front to pass through.

Next possibility to swim in the evening? A Channel swimmer just has to stay prepared and rested and catch enough sleep – which is another challenge in itself.